I remember hunting around the town of Cornwall for asparagus with my father. We were looking for what he called “wild asparagus” but the reality was that we were searching for asparagus that had been planted a century or more ago at farms and households abandoned for many years. We had our own well-tended patch in the back yard but there was something essential about foraging for the precious stalks in late Spring and collecting enough for a meal or two.

Also it was a bit of a competition for there were other asparagus hunters. One was my sixth grade teacher who mapped out eight or ten places around town where the foraging would be good only if you were aware of the shoots rising from the earth, hidden among the weeds. The window of opportunity is small. The young shoots are only good for a few days before they get beyond the harvesting size and branch into their spare, tree like maturity.

I still very much enjoy asparagus though I no longer look for the abandoned patches. Most have faded away, been lost and forgotten. I buy it at market when the availability is high and regionally grown. My feeling, as a chef, is that asparagus is something best appreciated seasonally.

Asparagus, garden asparagus or sparrowgrass as it was once called, is a perennial flowering plant whose young shoots are used as a vegetable. Native to Europe and Western Asia it is now cultivated around the world. It grows especially well in rich soil near marshy places with somewhat saline soil, too salty for most competing flora. Thusly when farmed, small amounts of salt may be cast over the asparagus bed to suppress weeds.

Besides the common green varieties, purple and white are also available in the market. Purple asparagus was originally developed in Italy. It differs from the green varieties by having a higher sugar content and less fiber. It often loses its color during cooking much like purple bush beans. White asparagus is botanically the same as the green except it is protected from sunlight when the first shoots appear above ground. White asparagus is popular in Europe, especially Germany, at one time being considered “Royal.”

Celebrated around the world, asparagus spawns festivals as a harbinger of the Spring and Summer seasons.

Leon G. Bouteiller was born and raised in Northwest Connecticut. He has held several jobs as chef in the community and is presently the Executive Working Pastry Chef at The Fife ‘n Drum in Kent. He is married to Patrice and lives in Cornwall with a Greater Swiss Mountain Dog named Banjo and two rescue cats named Ricky and Lucy. 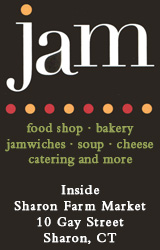